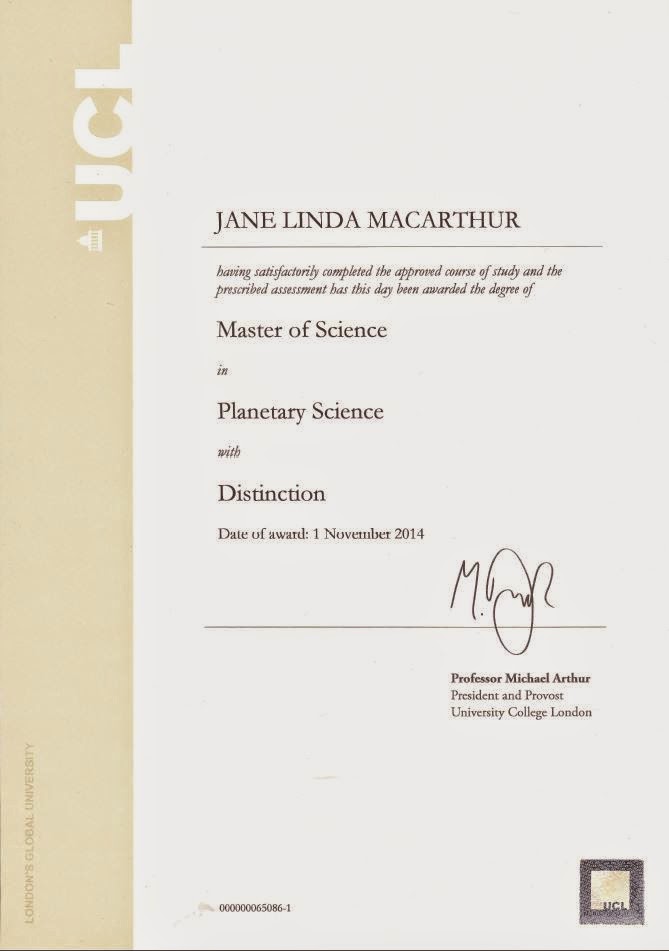 Dr Stan Love gave a fascinating one hour talk about his experiences as a scientist and astronaut at the University of Leicester on Wednesday 22nd October.

I got an invite to lunch with him beforehand as my supervisor had arranged his visit in conjunction with Dr Susanne Schwenzer of the Open University. I was excited to hear about his wide range of experiences, including ANSMET (the Antarctic Search for Meteorites expedition), D-RATS (Desert Research and Technology Studies), NEEMO, and his postdoc work on meteorites.

I was honoured to be invited to a Q&A session with Charlie Bolden at the American Embassy in London, where drinks afterwards allowed me to speak briefly with him. Many thanks for the photos courtesy of Jaisha Wray, as we had to relinquish our electronics at security. 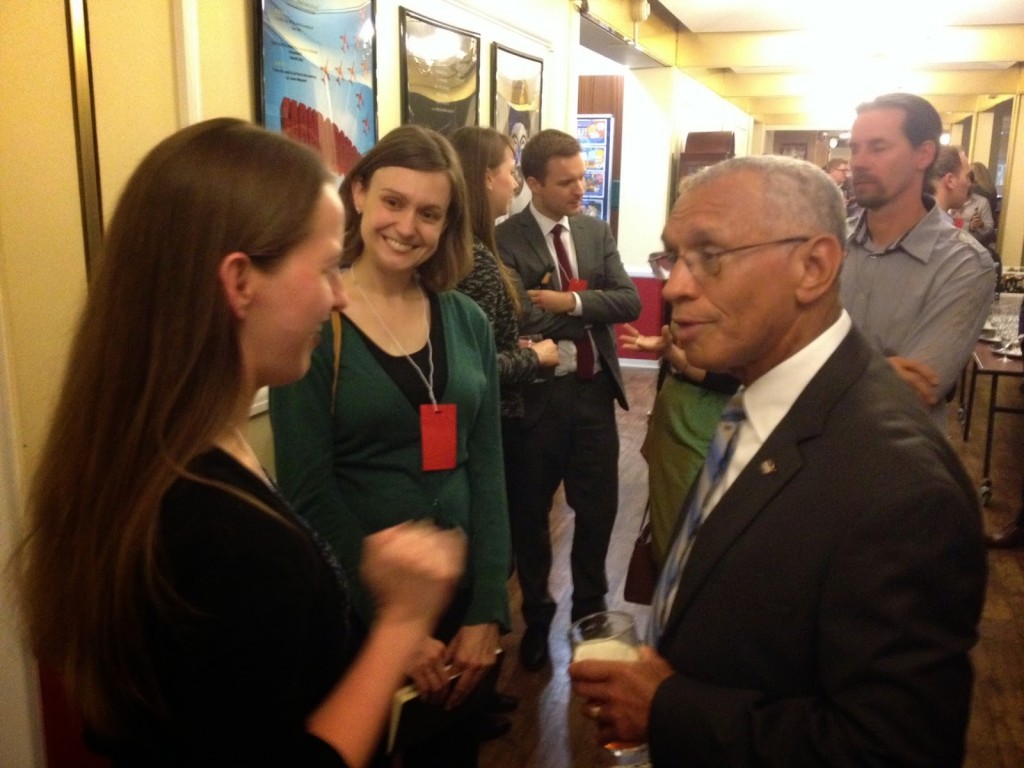 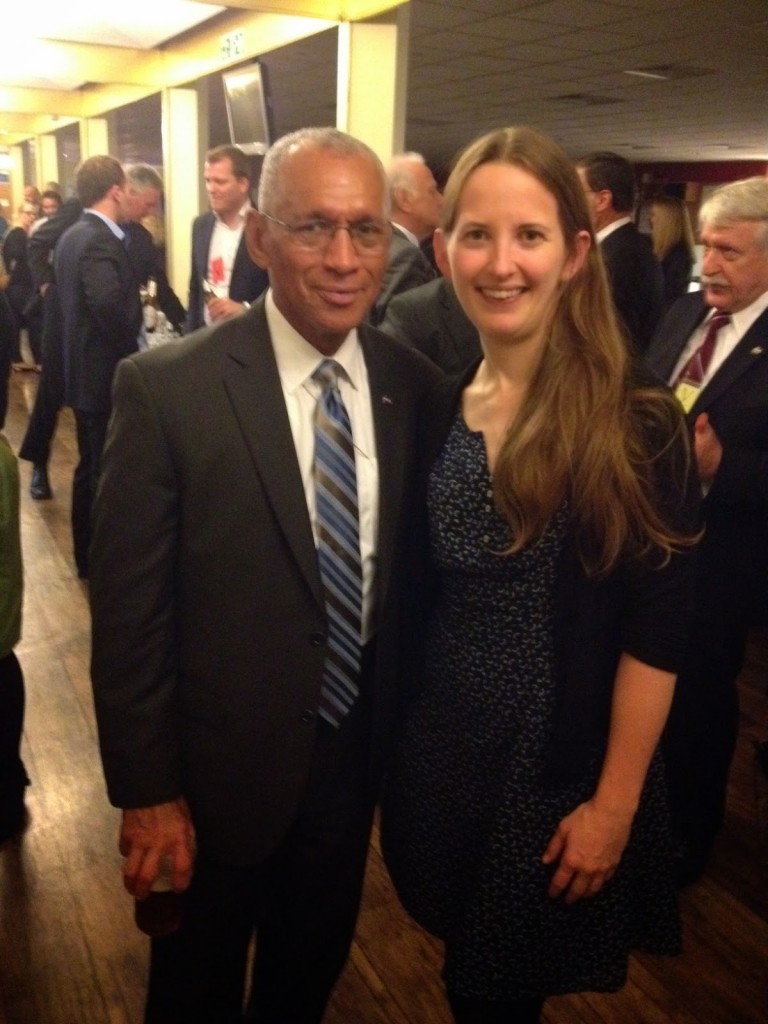 We spent an amazing 5 days in Germany learning about the Ries and Steinheim craters, on a field trip as part of my MSc course. 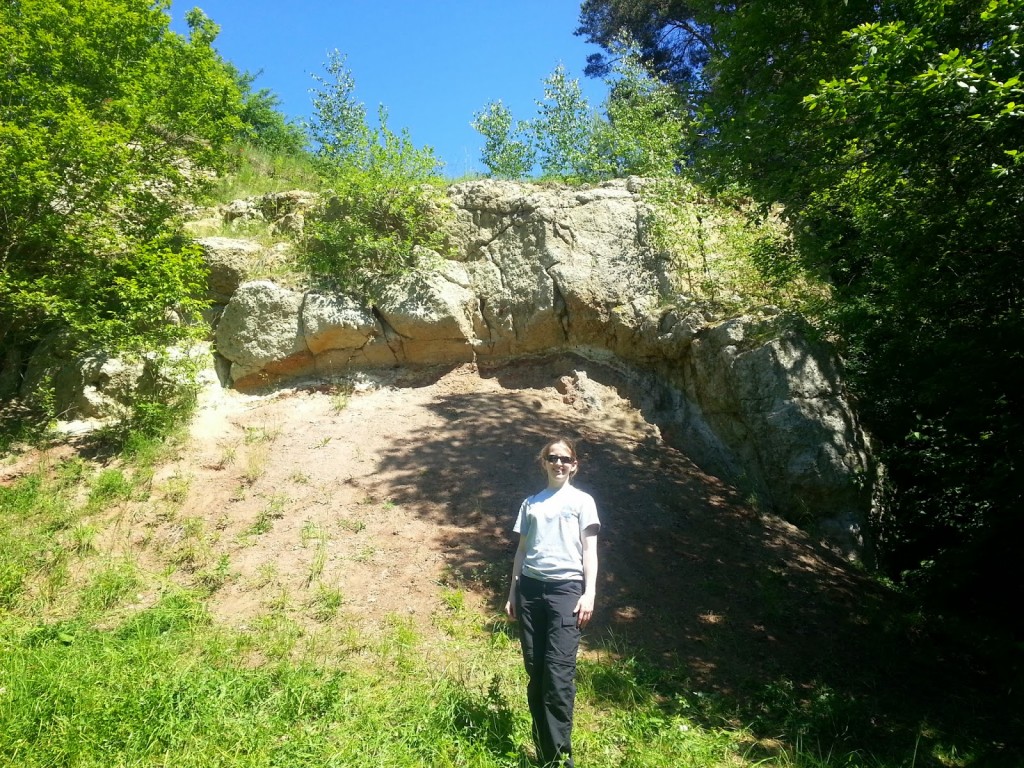 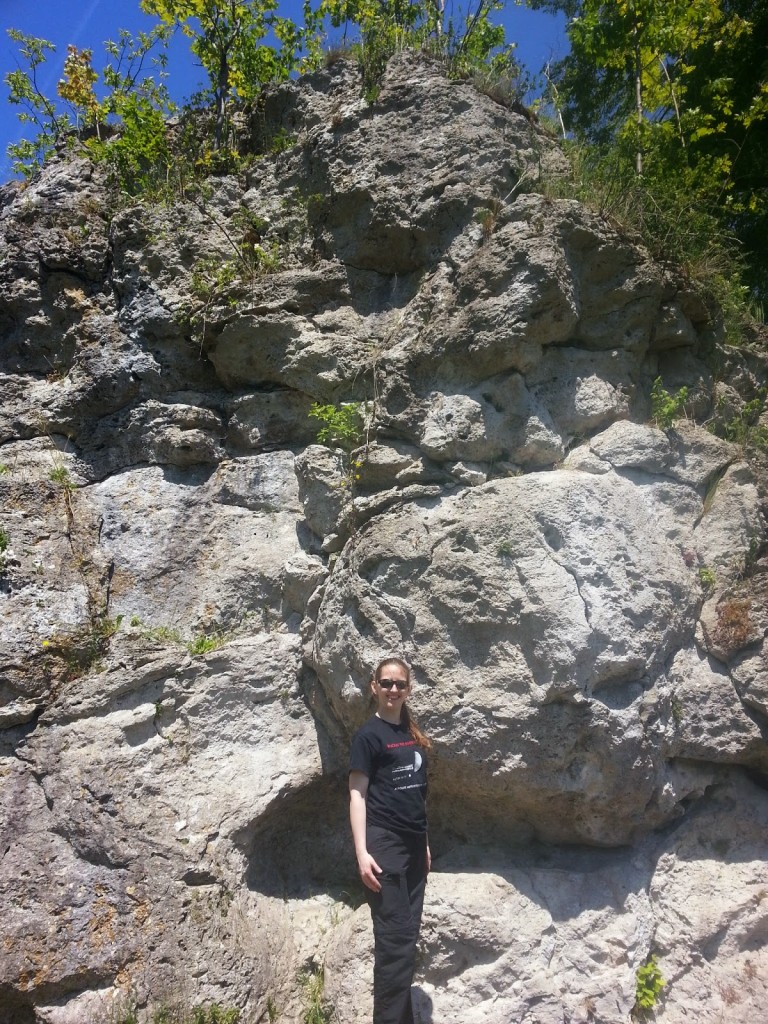 I presented my first poster on my MSc work on the ‘Black Beauty’ meteorite, NWA7034, at this two day meeting in London. 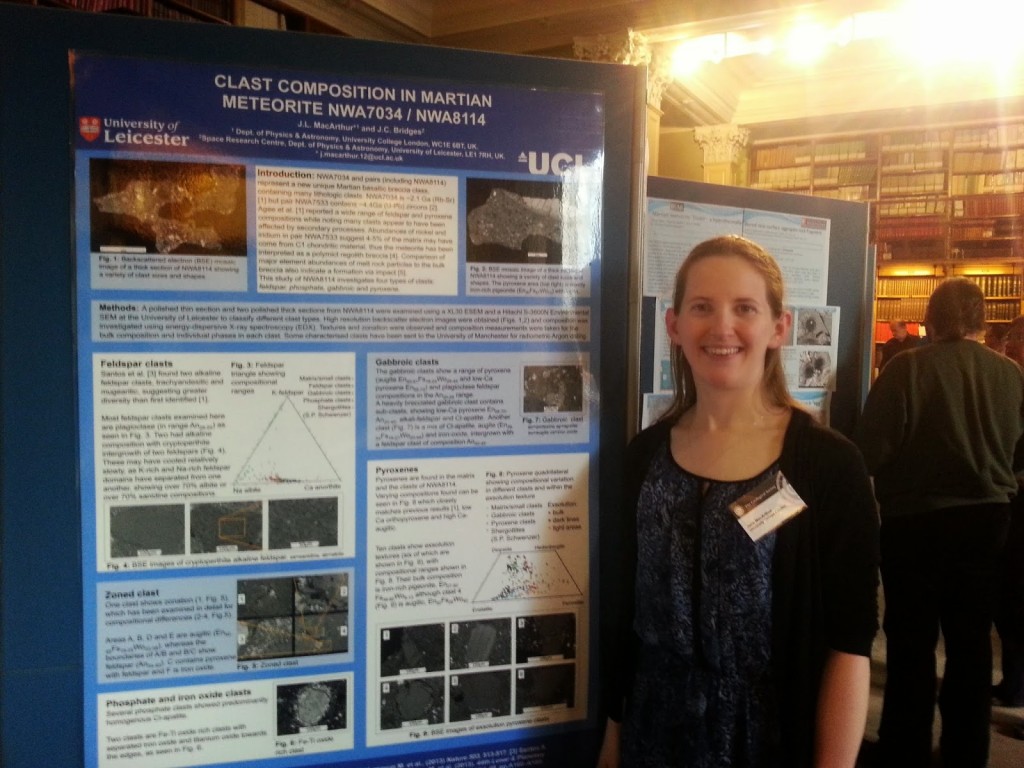 I presented our lunar team report at the European Lunar Symposium, held at the National History Museum, London.  This was from a planetary design workshop I attended at ESTEC earlier in the year. 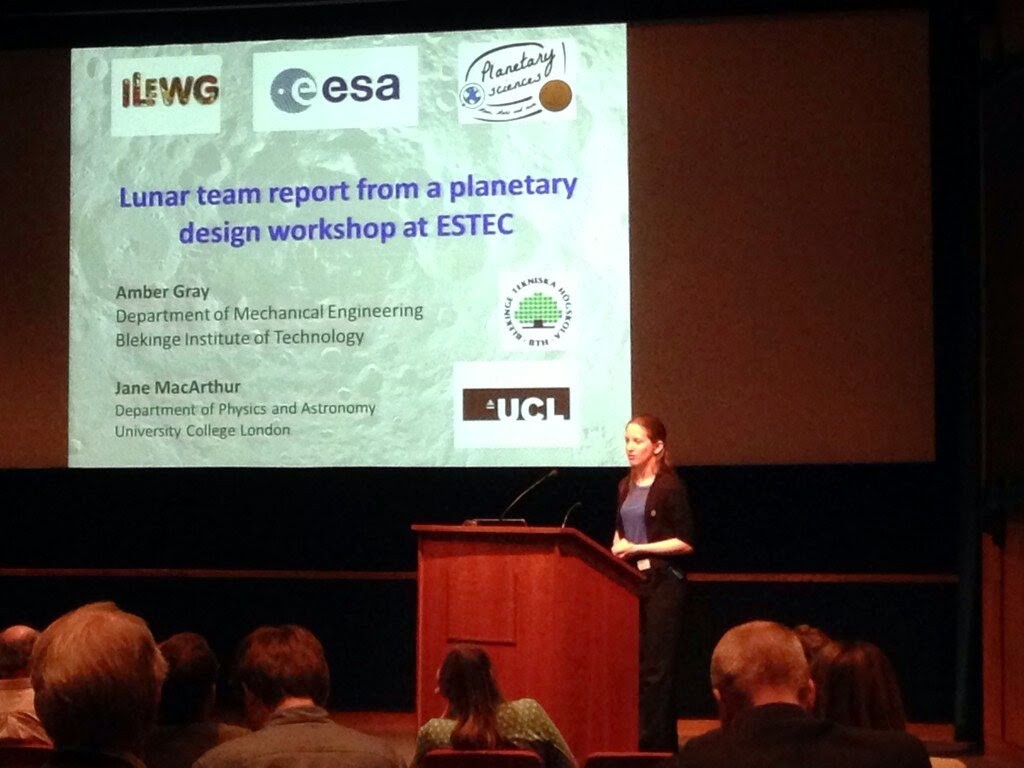 Standing for election as Councillor (G)

Please contact me if you have any questions, ideas or issues you would like to raise.  I am keen to demonstrate that there is strong interest from students and early career researchers in having closer involvement and representation within RAS.

After
graduating in Mathematics from the University of Nottingham, I followed a
career in accountancy (running my own practice for 9 years) while pursuing distance
learning courses in astronomy, planetary geosciences and astrobiology. In 2014
I expect to complete my studies for an MSc in Planetary Science at University College London and I have accepted an offer to continue my research interests in meteoritics by studying for a PhD at the University of Leicester.

I am working on Martian
meteorite NWA7034 and comparing its composition with ChemCam data from Mars
Science Laboratory, and my PhD will additionally include Stardust sample analysis from comet Wild-2. My interest in meteorites and impact craters as potential
habitable environments recently took me to impact structures in Estonia and
Canada. I also developed, built and field-tested in Morocco an atmospheric
sensor network for Mars exploration with supervision from the Mullard Space
Science Laboratory and working with the Austrian Space Forum.
As UK National Point of Contact for SGAC, STEM
ambassador and one of the Advisory Board of UKSEDS, I have been involved in outreach
at the Big Bang Fair, Stargazing Live, Royal Society Summer Science exhibition, talks in schools, and chaired a meeting
resulting in the affiliation of UKSEDS with the BIS. Through the Education & Outreach committee of the BIS I am helping with a space MOOC (massive open online course) proposal funded by the Department for Education, targeted at 16-18 year-olds. I compiled a listing of World Space Week 2013 events in the UK of 71 (2012: 17), placing the UK in the top 5 most active countries worldwide.
ESA
invited me to live-tweet their Farnborough 2012 space conference and I ran the
Twitter account for the European Planetary Science Congress 2013, achieving
around 1 million daily impressions. I attended an event at the European Space Policy Institute in Vienna in April 2013 and took part in “Voice of the Future, 2014” where young scientists put questions to the Science Minister. My articles have been published on
the UK Space Agency website, in BIS Spaceflight and Popular Astronomy
magazines, The Observatory, and the SGAC newsletter.
As a
qualified chartered accountant (FCA) I hope to be of assistance in maintaining the
Society’s long-term financial stability. I aim to make RAS better known within
the student population and encourage attendance of events by establishing a
social media strategy. I would like to identify suitable opportunities to work
with other national space organisations to support more events outside London,
by building co-operation and facilitating relationships.

Thank you very much for reading, I would be extremely grateful if you would consider passing this link on to friends and colleagues.

Read about the other candidates standing for election.

Tweets from the “Voice of the Future” session which I attended at Parliament on Wednesday 19th March 2014, many thanks to the Royal Astronomical Society for the invitation. The full video broadcast can be watched here. [Organised by the Society of Biology.]

Here is a collection of tweets from the GeoVUsie Planetary Science Symposium, held VU, Amsterdam, on Thursday 13th February 2014. Details of the speakers can be found here.