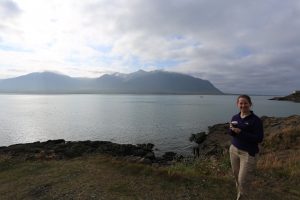 A great spot for morning coffee, looking south from the Settlement Centre at Borgarnes. The back wall of the gift shop is made from some of the oldest rock in Iceland, around 13 million years old. After treating myself to a geological map of Iceland, we got into conversation and received recommendations to stop at a waterfall, cinder cones and lava tubes on our road ahead.

Having thought we just had 500 km of road planned today, we enjoyed the Glanni (meaning “shining”) waterfall on the Norðurá River, near the small hamlet of Bifröst and the Grabrokarhraun lava field. This extensive lava field, formed 3000-4000 years ago, is likely a result of the two cinder cones below.

We stopped to climb the 170 m high Grábrók cinder cone, formed ~3400 years ago in a fissure eruption, part of the volcanic system of Ljosufjoll which extends 90 km to the west. We circled the rim before picking a good lunch spot.

From the rim, there was a spectacular view of the neighbouring Grábrókarfell cinder cone. 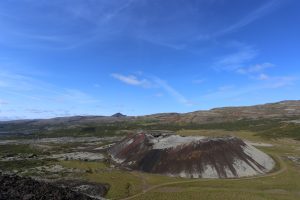 Next, lava tubes! We had the area to ourselves, as there were no signs about them, despite several coaches full of tourists stopping 300 m away to climb the cinder cone. We explored and found five tubes of varying sizes to go inside. Top tip: never go anywhere volcanic without your head torch. This was my favourite, the entrance was so narrow we nearly didnt bother, but once I wriggled through the gap, the tunnel was huge inside.

This was one of the larger easily accessible tubes, but we could only get about 20 m before it was impassable.

This shows the texture of the roof and upper walls. 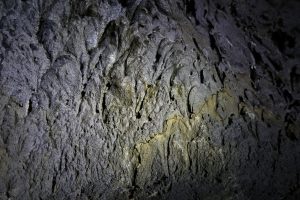