How would you like to travel to 5000m altitude to see 66 radio telescope antennas, discover a blizzard on top, use the safety truck to help the two 4x4s out of snow drifts, watch a 130 tonne antenna transporter being driven by remote control, see 2 antenna up close and inside, tour the Operations Support Facility (OSF) including the control room, speak to astronomers and operational staff? Given the excitement, it’s surprising any of us passed the medical (blood pressure & blood oxygen) to be allowed up to that altitude!

I was selected as one of eight lucky active and engaging social media users by the European Southern Observatories (ESO), to visit their Paranal and ALMA telescope observatories in the Atacama desert, Chile.

ALMA, the Atacama Large Millimetre/Sub-millimetre Array, is a giant array of 54 x 12m and 12 x 7m antennas. This allows us to probe some of the earliest stars and galaxies from the cosmic “dark ages” at the furthest distances from us, as their light wavelength has been stretched by the expansion of the universe.

Closer to home, these wavelengths allow us to see through the dust clouds of new star and planet forming regions to help understand these processes, which are otherwise obscured to optical telescope observations. The ALMA project is a partnership between Europe (ESO), North America (NRAO) and Japan (NAOJ) in cooperation with Chile.

The main antenna Array Operations Site (AOS) is situated at 5000m altitude on the Chajnantor plateau in the Atacama desert, Chile, where the average annual rainfall is less than 100 mm. The high altitude means there is less of Earth’s atmosphere to pass through, and low humidity means that the radio waves are not scattered much by water vapor in the atmosphere, so we can obtain good quality observations.

“Snow on the mountain”

Around 8.30am we arrived at ALMA, where we signed in and watched the safety video, before continuing up to the OSF at 2900m, where the majority of the work is carried out. Here we heard the disappointing news that the weather had been bad at the AOS, and the safety teams were clearing the roads and assessing if anyone would be allowed up. We proceeded to the medical anyway, which everyone passed, so we knew that if conditions on top improved, we wouldn’t be leaving anyone behind. The planned OSF tours were swapped to the morning and we awaited updates about the AOS.

“Different groups of antennas can be used simultaneously for different science”

ALMA can operate 24 hours a day (constrained only by weather, not needing night time like optical astronomy), so the OSF employs 300 people and deals with 600 GB of data collected each day. I was surprised to learn that usually 36-40 antennas are used for any individual science proposal; astronomer Tomasz Kaminski did not recall all 66 being used simultaneously in his time there. Thus, often more than one science question is being probed at once, with different sub-arrays of antennas being used to optimise output.

Astronomers ask to use ALMA for their science by writing a proposal, which are then peer-reviewed by specialists, and the top ranked ones are selected and scheduled for time. However, many factors come into play during this process such as the minimum number of antenna needed for required sensitivity and resolution, whether the observations are time critical, and then also the overall ALMA time is divided fairly between the member countries.

Software helps to manage all these parameters, and to define backup ‘filler’ proposal observations: if the observing conditions are not good enough for the primary target observations at any particular time, then observations will be made of a different “filler” secondary target (which has less constraints). Astronomers are generally remote observers and do not visit ALMA, as their observations are carried out by the OSF staff according to conditions.

“New residency to be completed later this year”

We saw the current small buildings that ALMA staff currently live in, next to the new, more comfortable, residency currently under construction due for completion later this year. The new building has deliberately been put a bit further from the OSF to make people walk a little, as being sedentary is an issue for a community living in such isolation. Three other large buildings are where the three partners (ESO, NAOJ, NRAO) finish their antenna assembly; each build their share of the antennas to ALMA’s specifications that are then tested, calibrated and handed over to ALMA.

All data collected is routed by fiber optics to San Pedro de Atacama and through to Antofagasta, whereby it connects to the university network and is stored at all three of the partner sites (ESO, NAOJ, NRAO) for security and redundancy. Argentina are constructing a new fibre optic link to enable ALMA to have further redundancy; during one freak weather incident, one of the main backbone cables in Chile broke which took 3 days to fix.

The “front end” of the OSF deal with the antennas and their receivers, whereas the “back end” deal with the correlator that brings all the separate antenna signals together; many electrical engineers of varying backgrounds drive the array. Every antenna contains a receiver unit which detects the radio waves, which is kept cryogenically cooled to 4 K (-269 °C). These are serviced regularly at the OSF. The overall 70 blue units as seen in the above video were built by the Rutherford Appleton Laboratory in the UK and then shipped internationally for different partners to contribute towards the contents and cryogenics etc.

Lo and behold, at 10.40am we got the all clear for the AOS! We were given bottles of oxygen and bundled into three vehicles.

We were warned to only expect 10 minutes on top instead of the original planned 2 hours and that the final road out to the antennas was not clear, but we would be able to see the array well from about half a km away. Given we had been bracing ourselves for not going at all, we took this in our stride.

The 25km road to the top is 12m wide, to accommodate a transporter carrying an antenna; these have a max speed of 5km/hr and take 6 hours to reach the top. The road is not banked on the bends, as it has to stay even for a loaded transporter. After half an hour we saw the first snow on the roadside; it took about 50 minutes to reach the top.

The array of antennas were all in the “survival” position, pointing away from the wind. The conditions on the Chajnantor plateau when we first got out are best demonstrated in this video:

The indoor version, about the science done using ALMA, is more audible.

We were glad to enter the second highest building in the world, the AOS Technical Building, to warm up and see the amazing correlator super computer, similar to the power of 9 million laptops, which receives and aligns all the signals from all the antenna, before transmitting the data down the mountain to the OSF.

We were very grateful that our ten minutes extended far longer. In the end, we spent about 90 minutes total at the top though some of this was due to the vehicle problems in the snow. Our two guides said it was the worst conditions they had experienced, and we were impressed with how efficiently the drivers dealt with the problems and kept everyone safe.

Back down at the OSF, we got to see inside one of the 70-100 tonne antennas. This is where the analogue signals from the receivers are processed and digitized before entering the data encoder and then being transmitted to the correlator.

ESO provided the two 130 tonne antenna transporters “Lore” and “Otto” as part of its contribution to ALMA. We got to see one of them driven by remote control, and were allowed up onto it afterwards. 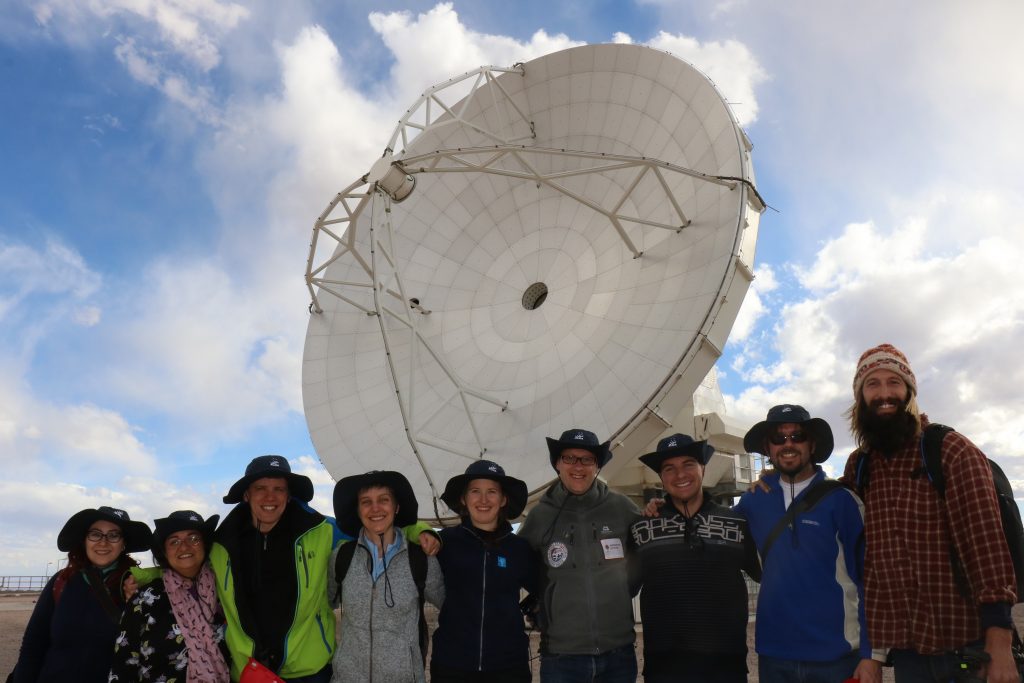 We all had a spectacular day, learning about the ALMA project, which is the largest ground-based astronomical project involving wide international collaboration and participation.

Credits
Huge thanks to ESO, ALMA, Nicolas Lira T., Oana Sandu, Francisco Rodriguez for the opportunity and tours, the Space Research Centre and University of Leicester for their support, and the other #MeetESO participants for a fun week and great photos.