Skip to content
Future use of the ISS
for Human Exploration: Charles Bolden (NASA Administrator)
“Throughout history, nations have always explored in order
to develop humankind. Exploration drives technological breakthroughs that
benefit all of society. The ISS is there to advance us further…but if we are
not tangentially relevant, not improving life on Earth, then we are missing the
boat, and we need to help remind everyone that we are trying to make life
better for people here on Earth. In doing so, we improve our ability to
explore.”
These were Charles Bolden’s opening words, at the
International Space Station (ISS) Symposium in Berlin on Friday 4, May.

Charles Bolden, NASA Administrator, set out President Obama’s
goals of visiting an asteroid by 2025 and landing on Mars by the mid-2030s, which
give a very short time frame considering all that we need to learn and achieve
before then. He cited the ISS as an extremely important stepping stone in order
to get there. A full permanently crewed ISS, and the mature ISS partnership
between ESA, JAXA, Roscomos, NASA and CSA, are assets unprecedented in the
history of human space exploration.
Naming the ISS the most technologically advanced achievement
of human kind, ahead of the space shuttle, he expressed the desire to make it
possible for more humans to visit it so they can see how incredible it is.
“A key component to our exploration strategy and utilisation
of this unique asset that we call the space station provides us with tools to
face processes that we will find far from low earth orbit. It will allow us to
simulate long flight duration analogues, addressing complexities and risks
associated with these missions.”

He mentioned some of the problems recently detected in
astronauts, like the loss of visual acuity, were not anticipated by medical
science. This has opened up the need for further experiments in other
gravities, perhaps the lower gravity of the moon, not just micro-gravity: “Is a
crew member going to come back having lost their vision? It’s not a minor
consideration. It’s been injected into the equation in the last twelve months.
“
Summarising the themes expressed across the two days of
talks, he stressed the ISS is a unique zero-gravity test bed platform, which
allows us to test new exploration technologies, and carry out scientific experiments
by removing gravity from the equation, which cannot be done on Earth. The net
needs to be cast as far as possible in looking for non-traditional partners to
bring in a wide range of experiments.

When asked about America’s engagement in a next generation
ISS, he replied:

“The ISS cannot be the only destination in low earth orbit;
private enterprise needs to create other destinations where we all can go. I
think it is really important as I see them as a commercial capability to enhance
the vitality of any nation, to grow business. I’m a free enterprise guy; the
way we open up business is by encouraging industry to build the next generation
missions.”
Over 250 delegates were invited to attend the ISS Symposium,
titled “Research in Space for the Benefit of Humankind”, representing all of
the partner countries and more. Scientific results to date as well as plans for
the future were discussed in detail over two days of presentations and
roundtable discussions. The feeling was that the conference had successfully
demonstrated the rich, diverse benefits of the ISS, and that the convergence of
ideas and objectives amongst the partners will continue to be key to its
future.
Later in the press conference, Bolden stated his two
messages to take away:
“It’s easy to do things by yourself; it’s really hard to do
things in co-operation with others, but I think that’s one of the triumphs of
the ISS.”


The International Space Station (ISS) Symposium titled
“Research in Space for the Benefit of Humankind” was held in Berlin, Germany
from 2-4 May, 2012. Over 250 delegates were invited to attend, representing all
of the ISS partners and more. This session looked at past and future science
carried out on the ISS concerned with long-term space monitoring.

Waleed Abdalati, NASA’s Chief Scientist, introduced the
round table discussion by saying the international space station (ISS) is a great
platform and opportunity, which we need to take advantage of in order to
understand Earth, the universe, and our place in the universe. The science we
can do from space spans earth science, heliophysics and astrophysics.

The first speaker was Pascale Ehrenfreund, Research
Professor of Space Policy and International Affairs, Space Policy Institute,
Washington, DC, and Professor of Astrobiology, Leiden University, The
Netherlands. Astrobiological experiments have been performed successfully in
earth orbit for more than two decades, looking at:
These have provided interesting new insights into the
effects of the harsh space environment on biological and organic materials.

Julie Robinson,
ISS Programme Scientist NASA told us about MISSE, Materials ISS Experiment, a series of materials experiments consisting of
trays that are exposed to space on the exterior of the ISS. Six missions with
thousands of samples have been flown since 2001.
MISSE-X will help update operations in the post-shuttle era, by deploying the trays
robotically rather than via spacewalks, and minimising the amount of mass to
return to earth, as well as providing outreach opportunities for student
collaboration.
The Japanese MAXI (Monitor of All-sky X-ray Image) experiment, attached to the ISS, was reviewed
by Masaru Matsuoka, Senior Advisor, RIKEN. It has:
Highlights include detecting jets from a giant black hole
and super bursts from a binary star.
Gerhard Schmidtke,
Senior Project Scientist, Fraunhofer Institute for Physical Measurement
Techniques, Germany, talked about the ISS SOLAR mission, installed on an
external platform of the ISS, which contains 3 instruments for solar
observation. So far 4 years of data has been produced. Data for a full solar
cycle of 11 years would be extremely useful, as it can provide the opportunity
to calibrate all other measurements, as satellite measurements show divergence.
ISS offers a unique chance to bring up, test and retrieve components, to see
what could be causing different efficiency of different instruments. There is a
need to obtain more accurate data; ISS provides this opportunity.

Boris Zagreev,
Head of Laboratory, Central Research Institute for Machine Building, TsNIIMash,
Russia spoke about the Russian research program, and the contribution made by
the ISS to biomedicine, geophysics, astrophysics, environmental monitoring,
biotechnology and long term exposure of different materials and their
resilience to extra-terrestrial conditions.

214 experiments on the ISS have already produced over 600
scientific articles and reports. Future Russian utilization plans include
further scientific research, such as studying ultra-high energy particles and
continued Earth monitoring, together with development of new technologies for
biomedicine, and technologies for future manned orbital and interplanetary
missions.
The final speaker, Torsten
Neubert, Head of Section for Solar System Physics, National
Space Institute, Technical University of Denmark, introduced ASIM,
Atmosphere-Space Interactions Monitor on the ISS. It is due for launch in 2015,
and will study thunderstorms by looking at lightning above the clouds and very
high up in the upper atmosphere. It is hoped this will provide new
insights into the physics of atmospheric processes powered by thunderstorms,
looking at electrical discharge in the atmosphere, radiation, water vapour
movement through the atmosphere, and the effect on climate and climate
variability.
Questions were then taken from the audience:
Do you have
difficulty getting funds for ISS from multi fields?
Abdalati: “There is
recognition that the ISS has a lot of value and potential to offer as we extend
its life. There is healthy tension between the science drive and the technology
platform push; we have this capability, let’s make the best use of it. There
are many instances where these marry up and it’s a win-win situation.”
What have you found
to be the biggest challenges in getting capability in space to the ISS (aside
from funding)?
Neubert: “The reaction is
often “great idea, but someone else should pay for it”. You go to the
racecourse and sometimes you win! I don’t know, I haven’t found a formula for
it.”
Abdalati: “The biggest
challenges are timelines and timescales. My student was doing a PhD, when the
experiment launched he was an assistant tenured professor. When samples came
back he was CEO of his own company. That’s a real challenge.”
Robinson: “ISS was
designed a long time ago so one challenge is things being upgradable. Because
it is a human platform we can upgrade it for this generation of instruments today,
and again in the future. Great flexibility is an extra asset.”
Abdalati ended
the session by saying:
“It starts with
believing in what you do and then convincing others to believe in what you do.
Shared belief can help it grow from there, and makes the potential much
greater. The great thing about this ISS symposium is being surrounded by people
who believe in it.”
Further reading: “ISS: Benefits for Humanity”

“In building the ISS partnership we have made an impossible
step, we have changed the world forever.  The ISS is a model for the future of humanity.
We have to manage the ISS as one part of a wider exploration program for the
benefit of humanity”
With these remarks, Jean-Jacques Dordain ESA Director
General, opened the International Space Station (ISS) Symposium: “Research in
Space for the Benefit of Humankind in Berlin” on Wed 2, May. Over 250 delegates
were invited to attend, representing the ISS partner nations.

Johann-Dietrich
Wörner, CEO of DLR, stressed that curiousity brings knowledge for tomorrow; if Einstein
hadn’t invented relativity, satellite positioning would be impossible.
Germany’s vice chancellor, Philipp Rösler, enthused about medical technologies,
such as the plasma ray which can disinfect small objects without touching them,
the research for which was carried out on the ISS.
The
agency leaders had a discussion session, where JAXA’s vice president Kiyoshi
Higuchi mentioned how the ISS will contribute to solving the issues we face on
Earth, while ISS Director Mark Uhran stated “we all have a mission: interplanetary
human space flight. The ISS will enable us to step forward in the future”. He added
that economic growth has its basis in research and development, which is what
the ISS is all about. Gilles Leclerc, CSA, said it requires courage and vision
to support long term projects, and others agreed it remains important to reduce
operational costs and increase efficiency. Further new partners would be
welcome.
A passionate speech was delivered by Heinz Riesenhuber,
former German Minister, about needing to capture the hearts and minds of the
public before spending their money: “If everyone knows that imagination is
behind every program, it makes it stronger.
63 countries have participated in research and education on
the ISS, showing that science and knowledge have no borders, while astronauts
motivate students in core ways that can transform their lives, according to
Julie Robinson, NASA.

Sergey Krikalev, head of the Gagarin Cosmonaut Training Centre, ended the first day talking
about the balance of creativeness and determinism when living in space. He and
Robert Cabana were the first people to enter the ISS in December 1998.

I successfully applied for an invitation to the International Space Station Symposium which took place in Berlin, 2-4 May, 2012, and enjoyed an amazing two days learning about the science being conducted on the ISS. 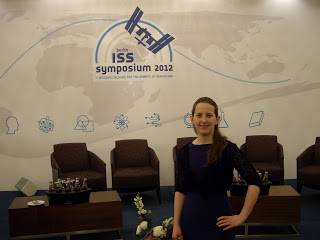 Top respresentatives from all five ISS partners were in attendance, including Charles Bolden and John-Jacques Dordain. Over 250 delegates attended, a diverse range of stakeholders including astronauts, scientists, engineers and politicians.

Paolo Nespoli (ESA astronaut) very kindly spent a couple of hours talking with a small group of us after the gala dinner.